Last week, one of the Pobl Care teams in Carmarthenshire received some spirit-boosting news that brought a tear to everyone’s eyes. One of the individuals we support has been discharged from hospital after making full recovery from CoVid19! Sarah, who lives at Ty Morlais supported living accommodation, tested positive for CoVid19 and was admitted to intensive care. She was quite poorly and was administered oxygen.

Sarah has lived at Ty Morlais for over 30 years after moving from the parental home.

She has achieved great many things living at the Pobl supported living accommodation, from studying at college to working in a Café in Gorseinon and volunteering with the RSPCA Llys Nini in Llanelli.

Sarah is an independent and confident person who is unstoppable! She has followed her dreams and planned, saved and arranged a special “dream holiday” to Florida three years ago where she swam with dolphins and fulfilled a lifetime ambition. 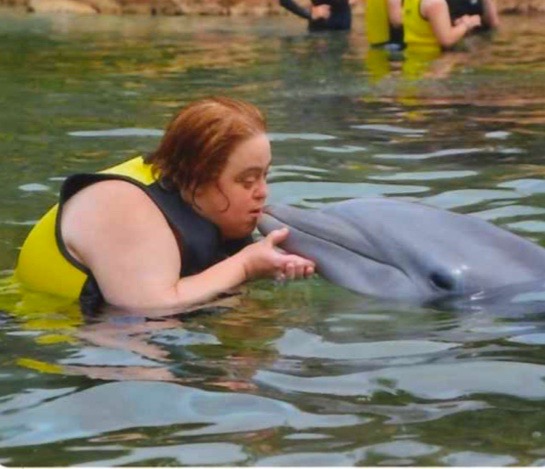 She achieved another life goal in 2018, when she moved into a self-contained flat to further increase her independence and living skills. Sarah is supported with cooking and daily living skills by the amazing team at Ty Morlais.

On March, 27th, Sarah started to have symptoms of Covid19 – a dry repetitive cough and a sore throat. This was identified by staff and following guidance, Sarah began to self-isolate in her flat for seven days.

During that time, the team kept talking and reassuring Sarah as the idea of self-isolation was quite scary, but she understood that the risk of infection was part of isolating as well as looking after herself. Sarah’s temperature was checked regularly, she was closely monitored over the following days, advised to drink plenty of water, rest and take regular paracetamol. Unfortunately, as the days progressed, the team observed that Sarah’s cough was becoming harsher and more persistent. On day six, Sarah appeared dizzy and disorientated and there was no improvement in her chest or cough.

The team have become very concerned about Sarah’s heath as she was being less alert than usual, struggling to breathe and had a purple tinge to her lips. Immediately, paramedics were summoned and gave Sarah oxygen and took her temperature which was running at fever levels of 38.8. Sarah was then taken to hospital. 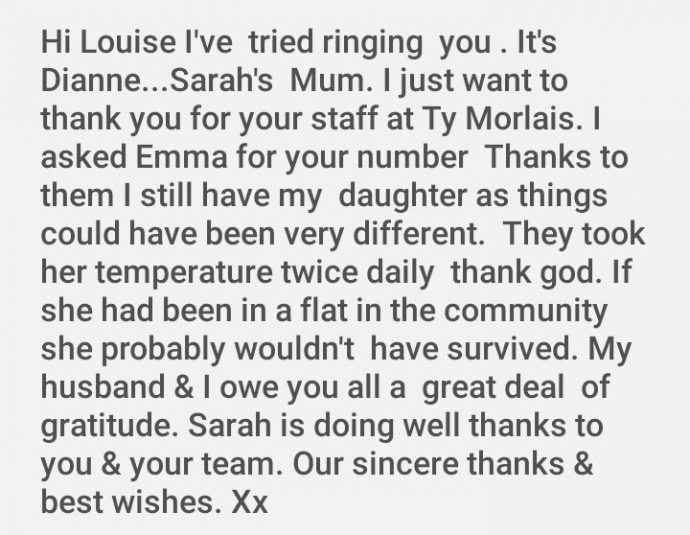 Sarah received excellent care at Prince Phillip Hospital in Llanelli and was on a CPAP machine for several days before her condition improved. Sarah is such a positive person and continued smiling even with the mask on. 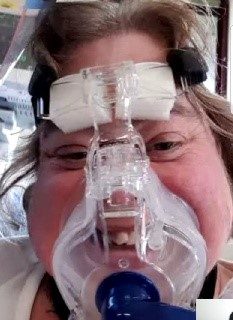 Sarah was discharged from hospital on the 11th of April and it was such a great, joyous occasion filmed by a family member.

Since getting home, Sarah has been focusing on recovery and getting back to full strength with the support of the team at Ty Morlais – she is very grateful to the NHS staff who she says saved her life and she is determined to carry on living life to the full and showing the world what an independent and strong person she is.

I am so very proud working within the care sector, and more so of our amazing colleagues. Sarah’s relief and joy was shared by everyone not least by those who have supported and built strong relationships with her over many years, but also across our services at Pobl Care & Support. Well done and congratulations Sarah, and a huge thank you to our team and to the NHS James Wadlow, Director of Care