New drop-in service launched in the Vale of Glamorgan as our teams continue to support Pobl’s customers - the only thing that changed is the method of delivering the high standard of service clients are used to.

Our services in the Vale are working closely with the local authority’s housing department to assist anyone who has a housing or homelessness problem. As well as assisting with the delivery of over 30 foodbank parcels every week via our new Drop In provision, Vale Housing Support, we are also coordinating the provision of foodbank vouchers with Citizens Advice Bureau in the Vale.

The Vale Private Rented Sector Scheme have been working closely with the Vale of Glamorgan Council, trying to source hotels for people who are being discharged from hospital but would still require nursing care.

The collaborative work between Pobl colleagues and hotels owners was a great success. As a result, nearly 1500 beds were ready for when they were need.

Despite the lockdown which has been in place across Wales since March, our colleagues in the Vale felt that the planned launch of a new Drop-in t serve the needs of the local community should go ahead as planned at the beginning of April,

The support is available to anyone who has a housing problem and, if they are homeless, the team will assist them to access the services they need.

“We are helping around 30 new people a week, offering advice on benefits, rent arrears and  to anyone facing eviction, but this is increasing on a daily basis. We are also assisting the local authority with coordination of temporary accommodation placements.” says Nathan Harding, manager.

The project has been extremely busy, and we have already supported over 100 individuals since 6th April. With the project being a reactive scheme, the support of the team has played a fundamental role in assisting the local authority, DWP and local foodbanks as they tackle increased workloads.

Covid-19 and its impact on lives, means that 76% of people currently supported  by the scheme have never accessed support previously.

“We have been supporting service users using a variety of different methods including Whats App, Zoom calls and email in addition to more traditional telephone support”, Nathan added. 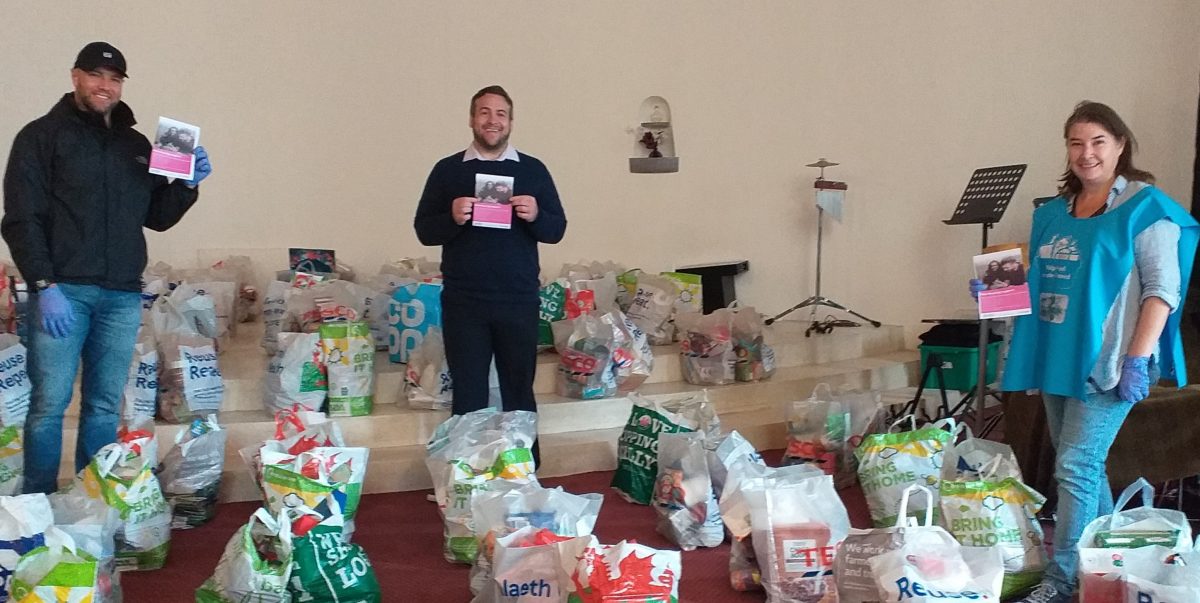 Partnership working in the Vale

Vale Housing Support and Vale Foodbank have been working in partnership since April.

Pobl are currently piloting a project with those members of the public who are referred to the team and once contacted, support is provided around the reasoning for needing foodbank assistance. The pilot has been a success so far and through such fantastic partnership working, Pobl colleagues have  made a real difference in helping to tackle food poverty in the County.

“The pilot scheme between Vale Foodbank & Pobl’s Vale Housing Support (Vale Drop-in) has been beneficial on so many levels. At the foodbank we now understand there are support needs and Pobl are specialists in understanding and identifying theses needs. Our service users not only get food parcels when in desperate need but additionally, they get wrap around support for their individual needs”

“Job Centre Plus is pleased to continue to work with Pobl as a trusted and valuable partner. We are happy to continue to explore ways we can build on this existing relationship with the new Vale Drop-in service and in so doing, support our more vulnerable customers with their housing and benefit related queries out in the community”

“I would like to express just how valuable the support given by Pobl drop-in has been to the people I work with in Probation. This has been especially true during the COVID crisis where the consistency of support has been critical to those individuals who may otherwise have felt overwhelmed by the difficulties they faced.”

“When I called Pobl for help I was in a terrible mess with my finances and on the verge of eviction from my home. My ex-partner had been controlling and abusive, I did not have any control of any money for years; I didn’t even know my Universal Credit log in detail.

After working up the courage to phone Pobl Drop-in Service, a weight was lifted instantly. The staff quickly identified that the benefits I receive were incorrect. I was being underpaid for months by £400pcm.

With support from Pobl, I was able to seek a payment plan for my rent arrears, council tax arrears and utilities. I received a back payment which enabled me to pay a big amount from my arrears and arrange an affordable repayment with my housing officer.

I even had enough left over from the back payment to decorate my living room, giving me and my children what feels like a home instead of somewhere we just stay. Pobl have literally sorted my life out by supporting me. I now have financial independence; something I never thought I would have. I have become a part-time carer, following advice from the Pobl welfare benefits worker. I love my job and it gives me such pleasure to give back into my community.”

“I called Pobl after seeing a post on Facebook about the new drop-in service and their partnership with foodbanks. I need food as I had overspent.

During the conversation the support staff started asking questions I’ve never been asked before: they were asking about my budgeting, housing and mental health. I told them I was fine and just need a foodbank as I had overspent on buses as I recently had broken my leg.

After the conversation had ended, I realised how much I need support. I rang the drop-in and began discussing the previous year and the debt I had. The support worker then began talking of things we could do to ease some of these burdens.

Most pressing is that I was facing eviction and council tax arrears and was burying my head in the sand. I started to complete a budgeting plan and created a payment plan my landlord agreed to. I am no longer getting evicted. I need a DHP (asking what that is), which I completed with my support worker over the phone and was accepted. This allowed me to keep my home and my kids can have their own room.

I am looking forward to being less stressed and not constantly worrying. I am decorating my home and started with my kids’ rooms. I feel like it’s my home again and this has helped with my mental health.”