We’ve just been granted planning permission for 16 homes in Neath, that will combine innovative technologies to allow 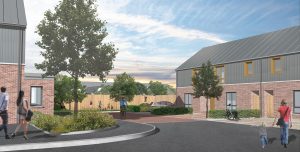 the homes to generate, store and release their own energy.

The concept for the homes goes beyond that of a carbon neutral model towards the overproduction of energy and will actively reduce the impact of fuel poverty and carbon emissions.

We’ve designed the layout of the 1, 2 and 3 bedroom homes to maximise solar gain; technologies include solar roofs, solar heat collectors on south facing walls and shared battery storage so that excess energy can be stored and used when its needed.

The Active Homes Neath Project is a partnership with Neath Port Talbot Council and SPECIFIC Innovation and Knowledge Centre and is set to become the first development of social housing to use these technologies in the UK.

“We are really excited about the integration of these technologies into new homes; the ability to generate energy from roof and wall coverings and store excess energy in batteries has the ability to make a real difference to the lives of the residents by reducing the amount they spend on energy bills. But also, we’re promoting a cleaner form of energy that has numerous benefits for the wider environment.”

The Active Homes model integrates innovative technology using the ‘buildings as power stations’ approach developed by SPECIFIC, the national Innovation and Knowledge Centre led by Swansea University. Chief Executive at SPECIFIC, Kevin Bygate, explained what this could mean for the average household:

“A report released this week has found that energy bills could be cut by more than 60% saving the average household over £600 a year if homes could generate, store and release their own solar energy.”

“’Homes as Power Stations’ is a very exciting project which places Neath Port Talbot and the Swansea Bay City Region at the forefront of work to address two of the UK’s most pressing environmental and social issues – energy efficiency and fuel poverty.

This pilot scheme, as the precursor of one of the City Deal’s biggest projects, also provides a major opportunity to utilise locally-developed technology to help safeguard and create jobs in the construction sector and to develop a highly skilled and technologically advanced supply chain within the region.

The scheme will play its part in shaping the next generation of housing design and I am looking forward to seeing its benefits being felt in our local communities.”