We have recently made a planning application to restore one of Llanelli’s landmark and most historic buildings, which we believe 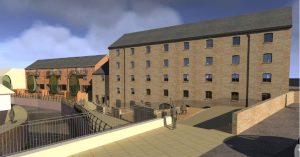 will also make a positive contribution to the regeneration of the town.

Plans have been submitted to Carmarthenshire County Council to convert the former Buckley’s Brewery Maltings and Barley Kiln buildings into attractive apartments within these historically significant buildings. Six new build houses have also been proposed for the site.

The Grade II listed buildings are the last original remaining structures on the former Buckley’s Brewery. Constructed between 1850 and 1855, they housed the malted barley for the brewing process until the brewery’s closure in 1998. It was once the largest brewery in Wales and during the height of production it was a cornerstone of Llanelli’s daily life.

The Barley Kiln is a rare building; with very few others given listed status. While the Malthouse, with its commanding, virtually unaltered south facade, is a unique architectural gem and a unique window into Llanelli’s industrial past.

Our proposals focus on the sensitive restoration of the Maltings and Barley Kiln, bringing them back into use to provide high quality residential accommodation. The existing structures will be carefully repaired both internally and externally, the layout has been carefully considered to expose existing columns and beams to ensure that the buildings’ heritage is preserved and honoured for future generations to come. 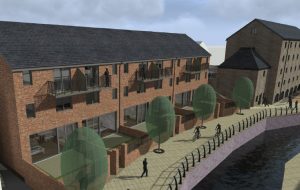 The 6 three bedroom new build townhouses will provide family accommodation on the site, set back from the river to allow the listed buildings to take the prominence they deserve.

Our proposals also include significant public realm improvements to the riverfront walkway in front of the Maltings and Barley Kiln buildings in order to encourage activity and public access along the river front.