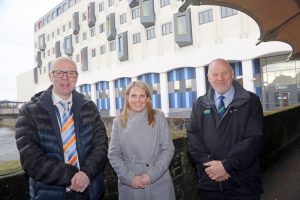 The two developments, Ty’r Orsaf and Oriel, provide over 70 new homes in the town centre and benefitted from Vibrant & Viable Places (VVP) funding which focuses on regeneration activities. Since it was launched in 2013, more than £123m has been given to local authorities and their partners to help revitalise town centres like Port Talbot.

The party also visited Coastal Housing’s Glan Afan development which is due for completion in the Spring.

“It was a pleasure to visit the developments and to see how Welsh Government funding has helped to redevelop three disused sites into new homes and commercial space. It’s an excellent example of how the VVP programme is improving communities across Wales.”

Our building contractors, Morganstone, completed work on the £4m Ty’r Orsaf (Station House) development on the site of the old Police Station in Station Road in January. The scheme, one of a number of buildings shortlisted in the 2019 RICS (Royal Institution of Chartered Surveyors) Awards (Wales), has provided 30 new apartments over three upper floors with three commercial units on the ground floor.

The £4.7m transformation of the riverside Aberafan House 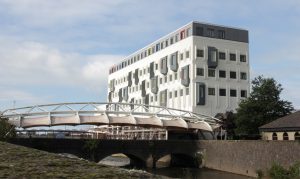 into new apartments was delivered in partnership with Hacer Developments. The striking town centre development, now called Oriel, has provided 41 new affordable homes (one and two-bedroom units) in the town centre.

“Oriel and Ty’r Orsaf have delivered two high quality buildings that will help to transform the centre of Port Talbot in line with the Welsh Government and Council’s regeneration ambitions for a mixed use town centre. There are now over 70 new affordable homes in the town centre which have proved to be highly desirable and people are already busy making them their new homes.”

“The Oriel scheme has transformed the appearance of this prominent vacant building, bringing a beneficial use to the town centre and helping to meet an identified local housing need. Together with the Glan Afan School and Ty’r Orsaf projects, it will add to the vitality and future viability of Port Talbot’s town centre.”