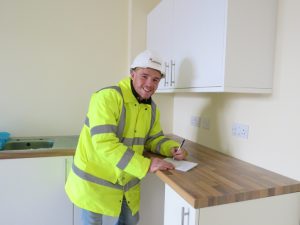 development thanks to the ongoing regeneration of Port Talbot.

Conor is the dedicated Health and Safety Consultant for our construction partners Hacer on the conversion of Aberafan House, former offices situated above Port Talbot’s shopping centre, into one and two bedroom affordable apartments for rent.

Our £4.7m development is one of a number of projects in Neath Port Talbot Council’s regeneration programme, which will see over £35m invested in and around the town centre and is partly funded by the Welsh Government’s Vibrant and Viable Places Programme.

The VVP programme has an emphasis on improving housing supply while also delivering projects which provide training and employment opportunities.

As part of the contract, we have worked closely with Neath Port Talbot Council and Hacer on community benefit targets including the completion of employment related courses or qualifications, employing and engaging those who have previously been economically inactive and retaining trainees or apprentices on the project. In September, after just 7 months of the contract, all the community benefit targets set by the local authority were achieved.

Conor is one of the people to have benefitted from these objectives:

After leaving school, Conor worked in call centres, and admits that he was coasting through life and wasn’t really sure what he wanted to do. As a former Welsh Junior Boxing Champion, Conor coaches at Port Talbot Bulldogs boxing club in Baglan and it was while volunteering here that he met his current boss who spotted his potential and told him about an opportunity to become a Health and Safety trainee through Jobs Growth Wales. Conor applied, was successful and made such an impression that he was taken on permanently after the placement ended.

“I started as a trainee with Greenbuild Management in 2016, since then I’ve passed the NEBOSH General Certificate and the CITB Site Managers Safety Training Scheme, gaining these qualifications has enabled me to get out of the office and start working onsite.

“We were appointed as Hacer’s subcontractors at the start of the job and this is my first experience of being the person responsible for health and safety on a development site. I deal with all the day to day issues that come with working on such a complex site, ensuring that safety regulations are adhered to.

“The on the job knowledge I’ve gained since starting on Aberafan House has been invaluable; I’m getting a great grounding in the construction industry and this opportunity has made me realise it’s definitely what I want to do in the future. I’ve also done more training whilst on the job and had the chance to do some site management support.”

Jonathan Hughes, our Director of Development West, explained more about why the community benefit targets are becoming increasingly important

“CITB [Construction Industry Training Board] research found that 22% of the workforce in the construction industry are aged over 50, this skills gap means there is a huge opportunity for young people to fill it. It’s great to see how young people like Conor are being attracted into the industry to try to fill this gap and it’s great to have worked with Hacer and Neath Port Talbot Council to provide such opportunities on this development.”

“It’s fantastic to see a local lad getting his first break on such a huge site, which will create even more opportunities for local people once it’s up and running.

“We are passionate about making the county borough residents and businesses see the benefits of all of the projects that are underway across Neath Port Talbot, and Conor is a great example of how we are working hard to make the most of these opportunities at every stage and in every new development”.

Conor is now excited about his future and is grateful to have been able to grasp the opportunities that came his way, and he feels passionate about giving something back and explained more about his volunteering at the Bulldogs boxing club:

“The Bulldogs was formed to support local young people facing barriers and challenges in their life to make positive choices and changes by inspiring success through boxing. As Chair of The Bulldogs Youth Council, I work with people who need a helping hand or just a bit more confidence to take advantage of the opportunities that come their way – I’ve been through it and it’s made me really appreciate the help and support I’ve received. I’m more than happy to share my experiences and what I’ve learnt along the way in the hope it helps or motivates someone else.”

“It has been rewarding to see Conor make this role his own, constantly seeking opportunities to improve and for being a positive, young individual.  Hopefully, Conor can inspire others like him to take a similar path, in what is, a rewarding and buoyant industry”.