Charter tenant Norman Porter has firmly got a ‘foot in the door’ after taking part in Ffilm Cymru’s life-changing training programme for film industry hopefuls, all thanks to a Charter email.

The “Foot in the Door” programme is designed to open up the film industry to people not already in employment, education or training by creating work opportunities in editing/production, locations, sound, script, photography.

Norman went to university to study for a graphic communication degree but when applying for design jobs afterwards felt “stuck between a rock and a hard place.” Consequently he was offered junior jobs, but needed a larger salary to be able to support himself and his family.  He ended up in a door to door sales role for a year, in which he excelled and ended up in a management position but “the money was good but ultimately it didn’t make me happy”.

Norman had been out of work for a short period, when he came across an email sent to Charter tenants informing them of an opportunity with Ffilm Cymru.  Norman had always had a creative flair, nurtured from a young age when his mother organised the local pantomime, and developed a talent early on for building props so “I jumped on it and grabbed the opportunity with both hands, and got started on my application straight away”. Norman was interested in the art department and was “chuffed to be selected”.

Ruth Davies, Charter Community Development Manager who has supported and mentored some of the trainees said: ”Norman is one of several tenants chosen to take part in ‘foot in the door’.  His passion and enthusiasm for all things creative was apparent from the get go, as he immersed himself in every aspect of the training”.

“We are so pleased his talent has been recognised and that this training is proving to be a springboard to what promises to be a fabulous career in the industry he loves.”

“Norman’s story really is a fantastic example of how housing associations not only build affordable homes, but can create life changing opportunities”.

Following a week’s training and preparation 33 year old Norman spent a week on the set of Michael Sheen’s Netflix drama Apostle where he impressed with his positive attitude and was able to put his skills to use in the art department. 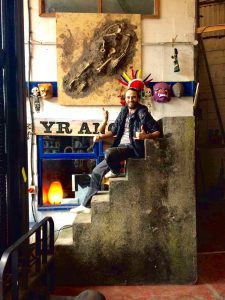 He also spent 3 days ‘on set’ at the National Diving Centre, where he relished “building a set and props from scratch, ensuring anything post 1905 was hidden” and enjoyed the freedom and trust bestowed on him by Production Designer Tom Pearce who trusted Norman implicitly “to run with it”.

Since the placement Norman has successfully secured a paid placement and passed his driving theory test “thanks to funding by Charter”, and has gone on to secure another role with  Tom Pearce.

Off the back of this training Norman was contacted 2 months ago by Ffilm Cymru Wales, he had been selected to join the same filming crew to work on new film Denmark on the 3 weeks of filming in Wales.

Foot in the Door has given Norman the break he thought would never happen.  He is gaining valuable experience in an industry notoriously difficult to get into, building key relationships and gaining a reputation for his creativity and work ethic.

With another film on the horizon early 2018, the future is very bright for Norman.  Although, he appreciates how fickle and changeable the industry is, and is taking it “step by step” – his ultimate aspiration is to carve out a career as an Art Director in the film or tv world.

The Foot in the Door scheme has been pioneered by Ffilm Cymru Wales and supported by Charter Housing, Severn Screen and our Colab.