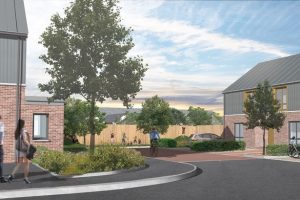 Our collective partnership with Neath Port Talbot Council and SPECIFIC will see an innovative 16 home development actively reducing the impact of carbon emissions and fuel poverty.

Our planning application has now been submitted and if approved by councillors, the proposed development will provide eight 2 and 3 bedroom homes and eight 1 bedroom apartments on the site of the former Hafod Care Home in Neath.

The Active Homes model will integrate innovative technology developed by SPECIFIC into the homes, building beyond the concept of carbon neutral homes towards overproduction of energy giving multiple options on how those funds can be reinvested.

The development in Neath is set to become the first development of social housing to use these technologies in the UK.

“For the first time we can demonstrate the benefits of the latest technologies in affordable housing developments. We’re aiming for a comfortable and pleasant atmosphere to live in, with homes that also generate most of their own energy needs from the roof and external wall coverings. This will dramatically reduce bills for our tenants, along with fuel poverty and carbon emissions.

“Ultimately we want to see this type of project to become the norm for both rented and owner-occupied housing. We’re aiming for a future where the manufacturing of the materials and components for these homes will be sourced locally from within the county of Neath Port Talbot and south Wales.”

Based at Baglan Energy Park, SPECIFIC is a national innovation and knowledge centre led by Swansea University with strategic industrial partners including Tata Steel. It works with a wide range of partners from academia, industry and government to turn buildings into power stations that can generate, store and release solar energy.

“Not only will these houses be comfortable and affordable to run, but collectively they have the potential to reduce stress on the local electricity grid. Building thousands of houses like this removes the need to build new power stations.”

“One of the key drivers of the Swansea Bay City Deal and an energising Valley Taskforce priority is to establish our region as a pioneer and leader in energy, health, manufacturing and creative technologies.

“The Homes as Power Stations concept has the potential to make a huge contribution to addressing energy efficiency and fuel poverty, and in turn improve the wellbeing of the people in our communities.

“We also want to see the benefits of what is developed locally exploited locally and this project in particular would not only safeguard and create thousands of jobs in our construction industry, but develop a highly technologically advanced and skilled large scale supply chain.

“City Deals are long-term plans but I am very pleased to see that our partners have worked quickly to get to this first step in delivering what is one of the biggest city deal projects.”

Following progress on this development, the goal is to roll out the concept across the Swansea Bay City Region area to both new housing projects and retrofitting existing homes.