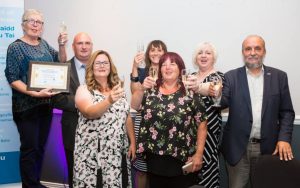 The sustained communication and structured engagement that took place during the formation of the co-op beat off stiff competition from 8 other contenders from across the social housing sector.

Here we take a closer look at the co-op and find out what impressed the TPAS judges.

The Old Oak story starts back in 2014, when Welsh Government funded 3 housing co-operative pilot schemes to explore the use of co-operative models as an additional affordable housing option.  Gwalia partnered Carmarthenshire Council to deliver one of the three; located in Johnstown, Carmarthen and consisting of 27 homes, Old Oak, as the co-operative members later named it, became our first tenant-managed housing co-operative.

“While the homes were being built, the co-op members went through an intensive 18 month training programme in all things housing management. Dave Palmer of Wales Co-operative Centre was an integral part of the team, we all met every two weeks and the members learnt about everything from income management to property maintenance, a demanding programme both in terms of the amount of time the members needed to invest and the work they needed to put in to increase the skills base of the co-op.

All their hard work paid off, it’s great to see them now putting that theory into practice, exploring and challenging the way we do things, which in turn has made us question whether there are better ways for us, as an organisation, to do certain things.”

At the end of the training programme, the co-op members had to decide collectively which management functions they would take on and which they wanted Gwalia to provide.

“The management committee are responsible for all lettings, so all applications go straight to them for allocation. Early on in the process one member volunteered to take responsibility for the communal landscaping, and the committee will also deal with any instances of anti-social behaviour, something they felt they could manage effectively because they’ve spent so much time together and all know each other really well.

They have also retained the right to buy in different services from us should their needs change. For example, after much debate they chose to use Gwalia’s repairs service for the time being but as part of the management agreement they’ve got with us, they’ll review this decision annually.”

Clearly proud of the achievements of the co-op, Vicky said 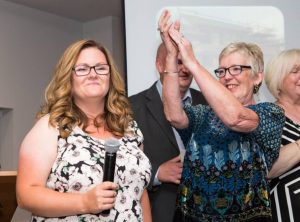 “I’m not ashamed to say there were a few tears when we found out we’d won the TPAS award. It’s been a privilege to be part of Old Oak’s journey and witness how this process has had a profound effect on the members of the co-op. It’s amazing how a cohesive co-operative can enhance people’s lives and it’s great that the members of this authentic and thriving co-operative have been recognised.”