Together with housing developer Lovell, and apprentice training organisation Y Prentis, we are showcasing the success of apprentices employed on our major housing development to create 250 new homes near the centre of Newport.

The project has so far enabled 18 apprentices – employed either by Lovell or the company’s subcontractor partners – to learn their trade helping build the development which got under way in 2014. 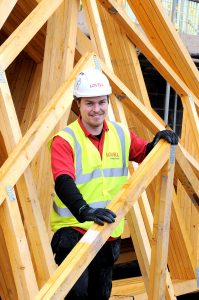 They include 24-year-old Chester Rowles from Caerleon, just outside Newport, who joined Lovell at Loftus Garden Village two years ago as an apprentice carpenter. With the company’s support, the trainee carpenter has passed his NVQ Level 2 carpentry qualification and is now working towards his Level 3 award. Chester says: “After leaving school I got a job as a ski instructor and was working at an artificial slope at Pontypool but more and more ski centres were closing and a lot of people were telling me I should get a trade, especially older colleagues who said they’d always regretted not taking the opportunity when they were younger. I began doing a diploma course in carpentry at Coleg Gwent in Newport and got the chance to be interviewed by Lovell for an apprenticeship at Loftus Garden Village – it fell into my lap really so I’ve been pretty lucky.

“After being a ski instructor, which was a lot more laid back, working on site was definitely a change of pace but it was a change for the better. The carpentry was more of a challenge, I had a lot to learn, but there are really big rewards. I get to make stuff – there’s something really cool about that. I look at some of the houses I’ve worked on and I’m amazed. I would never have imagined I would be capable of doing some of the work I’ve produced. Lovell’s support has been fantastic and things are going very well, I can see I have a real future whether it’s running my own business or moving into site management which is another option.”

Neil Taylor, Pobl Senior Project Manager said:  “Pobl and Lovell are a great example of how housing organisations can work together to create training and employment opportunities that will not just benefit young local people like Chester, but also the future of the sector”.

“Chester has been a fantastic addition to the Loftus Garden Village workforce, and we are very pleased to see how quickly he settled on his new career path and how he daily relishes the challenges learning a new trade such as carpentry has thrown at him. We wish Chester all the very best in his career and his future aspirations”.

Lovell regional managing director Kate Rees says: “Engaging with the local community to create a legacy of benefits for local people has been a central aim of the Loftus Garden Village scheme. It’s great to see Chester and the other apprentices working on the project making the most of these opportunities, particularly at a time when the industry urgently needs skilled workers to tackle the shortage of new homes across the UK. Giving apprentices the chance to train at Loftus Garden Village is an important part of the work we are doing with Pobl and a great example of how the development’s positive effects extend beyond the delivery of new homes, giving local people the chance to access potentially life-changing opportunities.”