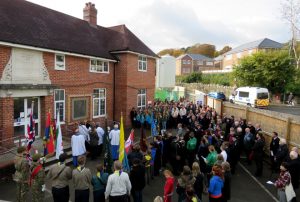 On Sunday 13th November we paid our respects with the Clydach community to remember those who lost their lives while serving their country.

The War Memorial in the village is located at the former Clydach Hospital where we’re currently developing 14 new homes, 4 of which will be specifically for ex-service men and women and will be managed by welfare charity, Alabarè.

After a service in St. Mary’s Church, many local groups, including scouts, brownies, St John’s Ambulance and members of Clydach community Council took part in a Remembrance parade which ended at the War Memorial.

Founded in 1924, Clydach War Memorial Hospital was built for the community by the community to support veterans returning from WWI.

Every year the Memorial plays an integral part in the community’s commemoration of those who have sacrificed themselves in the line of duty.

As part of the new development, the War Memorial is being sensitively restored and four apartments will be provided within the Hospital’s historic frontage as part of Alabaré’s Wales Homes for Veterans initiative which provides homes and support to ex-Armed Forces personnel.

Joseph de Lacey, Team Leader at Alabaré for the region, said the development will secure a fitting future for the building:

This is a wonderful opportunity and it feels almost like a seamless progression for the hospital; once again veterans will get the support that they require after their service to their Queen and Country, at the very building that was designed to help and support them in the past. It is an honour for me to be alongside this community paying their respects to fallen members of the community at this time.

We recognise the historical and emotional connection the people of Clydach have with the War Memorial Hospital and have been keen to ensure that safe access to the War Memorial is available to the community during the construction period.