This week marked the completion of the successful conversion of a former cottage hospital in the Swansea Valley. 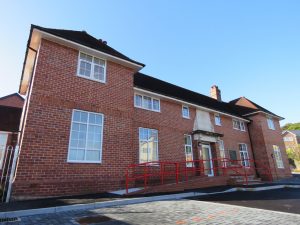 Founded in 1924, Clydach War Memorial Hospital was built and paid for by the community through public subscriptions to support veterans returning from WWI. The historic part of the hospital, which includes the War Memorial itself, has now been converted into apartments specifically for ex-servicemen and women.

The apartments form part of our larger development, Clos Coffa translated as Remembrance Close, where another 8 family homes and 2 bungalows have been built to provide much-needed affordable accommodation locally.

Through our partnership, Alabaré will provide accommodation and support to four people in the new apartments through their Homes for Veterans Wales initiative. 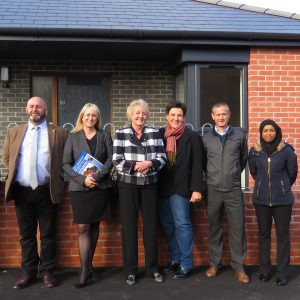 Joseph de Lacey, Team Leader at Alabaré, believes the partnership has secured a fitting future for the building:

“It feels almost like a seamless progression for the hospital; once again veterans will get the support that they require after their service to Queen and Country, at the very building that was designed to help and support them in the past.”

Andrew Vye, Director of Housing said: “Every year on Remembrance Sunday the Memorial plays an integral part in the community’s commemoration to those who have sacrificed themselves in the line of duty, so we know how important this building is to the community of Clydach and we’re pleased that we’ve been able to help protect this tradition for future generations.

“The partnership with Alabaré, an organisation that shares our social values, has facilitated the delivery of a vital service for ex-Forces personnel in this area; combining housing with dedicated, specialised support.”

“Everyone involved in this conversion development deserves enormous credit because it’s a superb project that’s been sympathetically carried out, helping retain the character of an historically significantly building for the benefit of the nearby community.

“Not only will the partnership between Pobl and Alabaré build on everything the council does to support the Armed Forces community in Swansea, but the bungalow and family home elements of the scheme should also be commended because of the ground floor accessibility to wet rooms that have been incorporated into their construction.

“I believe this is a great example of lifetime homes that contribute to sustainable communities.”